The Windsor Cub Scout Pack 155 Pinewood Derby will be held on January 26, 2019, at the WINDSOR ELEMENTARY SCHOOL CAFETERIA. Weigh-in, inspection, and registration will be conducted from 9:00-9:45am, and racing will begin at 10:00am.

9:00 am — Registration Begins. NOTE: Snacks will be available.

9:45 am — Vote on Best Car Design until Racing Begins.
10:00 am — Racing Begins with trophies awarded after each Den completes
11:15 am — Open Class and Pack Championship races
12:00 pm Disassemble track, cleanup, leave no trace.

Den Leaders:
Please plan on having a skits to perform throughout the races between heats. Also, have each of the boys pick out a favorite joke of theirs to say on the microphone.

For all races, the fastest average times will be recorded using computer software combined with “The Judge” integrated finishing line sensor. Races will consist of several heats. Each car will be allowed to race an even number of times on each lane of our 3-lane track per race. The cars with the 3 fastest average times will be Den winners. The 1st and 2nd place winners from each Den will be eligible to race in the afternoon Pack Championship.

• The 1st and 2nd place winners of each Den or Patrol will be awarded trophies and earn a berth in the Pack Championship.

• Voting for Favorite Car will take place before racing begins.

• Racers who qualify for the Pack Championship races will be allowed to remove their cars from the pit area in order to make adjustments or minor repairs. However, any car that leaves the pit area must be re-inspected prior to participation in the Pack Championship.  Repairs and inspections will take place between completion of within-rank sessions and completion of open class races.

• 1st and 2nd place cars from each Den will compete in the Pack Championship races, using the same racing scenario used in the rank sessions. We will also be including “Wild Cards” — the top 5 fastest times from the pack for scouts that finished outside 1st or 2nd place in their den races.

• Trophies will be awarded to 1st, 2nd, and 3rd place winners in the Pack Championship race according to the fastest average times recorded. Placement in the event of a tie will be determined by the software.

• Open-Class Racing will take place before the Pack Championship races. All Open-Class entries must be inspected and registered during the general registration period. Anyone may participate in the Open-Class races, and we especially encourage owners of previous Derby-winning cars to join in the fun as well as parents who would like to display their engineering and handicraft skills! The 1st place winner from the Open Class will also be awarded a trophy.

The 1st – 3rd place finishers from each den during our Pack 155 Pinewood Derby qualify to compete in the 2018 Yahara District Pinewood Derby. The Pack will pay the entry fee for the top 3 finishers from each den who choose to represent Pack 155 at the district derby.   The date of the council derby has not yet been announced, so stay tuned for updates! 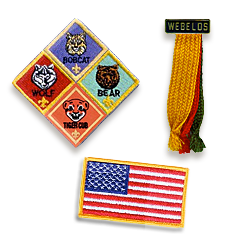